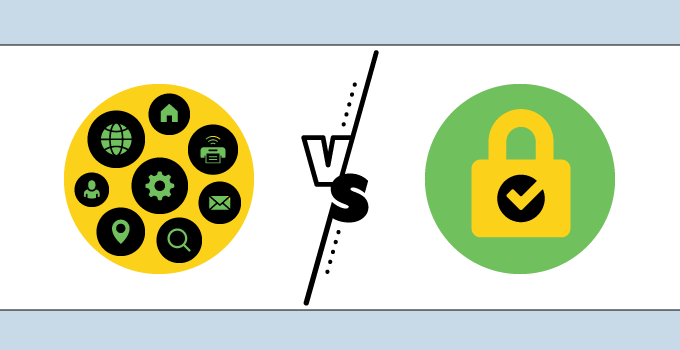 Trying to get people engaged in a discussion about NAS is a bit of a losing game. The technology isn’t new, and its use falls into three rough categories, with some amount of overlap.

What’s left are boutique applications for very specialized power users, who will be happy to talk about it for hours with the two other specialists left in the room after the mass exodus out the door. As interesting as I may personally find that, I’m also aware that most people would rather watch paint dry than listen to that sort of thing.

There are a few things that I think people would be interested to know about how NAS is used in a modern computing environment, though. I will do my best to not put you to sleep, or have your mouse frantically searching for the ‘back’ button.

As with all computer equipment, there is a tradeoff between price and capability, with two different ‘leagues’ of NAS storage out there.

The key difference is that of abstraction, wherein the top-tier NAS manufacturers have made the system less about what RAID level it runs or how to set up data sets on separate redundant systems, but handles all of that for you, with the idea being that the cost you save on IT employees justifies the astronomical per-GB price tag. For massive enterprises with correspondingly massive data sets, this makes some sense.

Buffalo falls squarely in the second category, and I’ll leave the first behind to focus on that, and finally come to the subject of the somewhat clickbait-y title.

SMB NAS splits into a couple of categories as well.

Whenever I go to a review site for NAS, it seems likely that the reviewer is one of those specialists that is fascinated by turning their NAS into a Git server, or a simple mail server, or an LDAP server, or a Plex Server.

(A short aside on Plex)

If you don’t know what that is, you could be forgiven for thinking that’s some arcane acronym for an obscure network application with techy sounding words, like ‘Parsing Library Extension’, or ‘Protocol Layer Exorcism’.  In actuality, it’s a media center application that lets you pretend to be Netflix for your friends and show off your vast library of (what I’m certain are) totally legal media conversions of DVDs you have right next to the system in case the MPAA ever asks. It’s how geeks flaunt their digital wealth to each other, it’s super cute really.

Incidentally, if you notice and are bothered by how I will not be explaining Transcoding, even though it’s IN THE TITLE, I’ll admit that your media library is much, much bigger than mine. Feel better? Me too!

Anyway, these reviewers go on and on about the app store built into these systems, but never once mention how these units are a bit like kit cars. You can’t drive them out of the box, you have to put them together. If you are an internet reviewer, that’s probably the sort of thing you do for funsies on a Friday night, not that I’m judging. 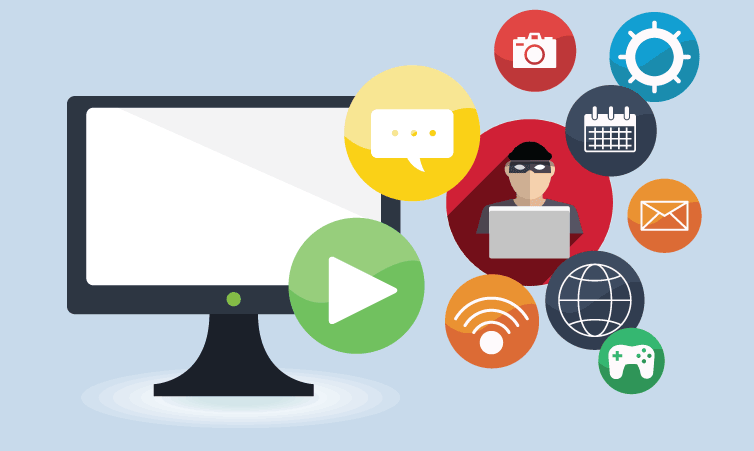 Yet imagine you are using a NAS for business. You most likely want it to store backups. You want it to be super secure. You want it to be easy to use, and reliable. You want good tech support with low wait times, and you’d rather not have to remember who you bought those drives from so you can get a warranty claim on one if it fails.

A Buffalo NAS simply hits every one of those criteria, that in many ways is superior to an enclosure. Since I can’t count on the reviewers of the world to do it for me, here is my (shameless self-promotion) comparison chart. 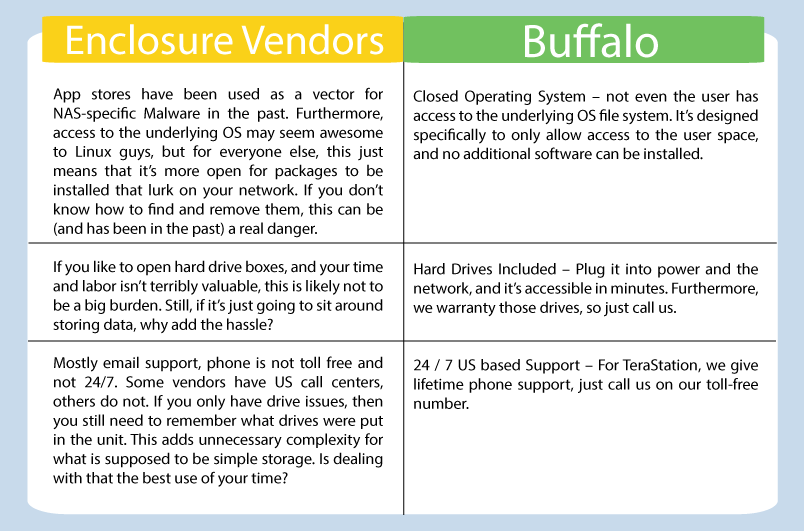 To be fair to reviewers, if you really are looking for an application server rather than a storage server, then enclosure vendors can fit certain usage profiles. If you want a development machine that you can play around with and stream video from, then they can be great.

Still, my experience talking to IT professionals and Service Providers tells me that they’d much rather be wrestling with bigger issues than their secondary or tertiary tier storage. Their time is better spent on things that directly improve the lives of their users and customers (and thus their bottom line); and having a backend storage device that could moonlight as a Minecraft server for the IT team just isn’t adding that kind of value. The peace of mind that comes with a closed OS and low-touch management does.

Well, I hope you’re still awake. While this may not be as simple a read as “BEST NAS EVAR” with a cute top 3 list and waxing rhapsodic about an app store without ever mentioning what the apps actually -do- (hint: mostly fluff) I believe it gets more to the heart of what the average professional is looking for in NAS. Easy, reliable, secure, supported.

We’d love to talk to you about your individual use case. Our sales team can get an engineer to really dig into what you need without making you go buy drives somewhere else or trying to convince you of the value of a photo sorting app. Give them a call! 800.866.7466 or email sales@buffaloamericas.com!

Ben DeLaurier discusses cost and performance of SSD and NAS

Top 5 Methods of Backing Up Data and Why

Tim Li discusses the top 5 methods of backing up data along with their pros and cons. Data is the core resource for...