Many modern businesses find themselves scrutinizing storage options in order to handle the increasing amounts of data generated and transferred in a typical business day. When installing storage, small businesses often choose to deploy network-attached storage (NAS): a single file-level storage device that serves files over the network. However, when businesses expand, they often run issues with scale and performance with disparate NAS devices. More users accessing the same server means it might not be able to keep up. 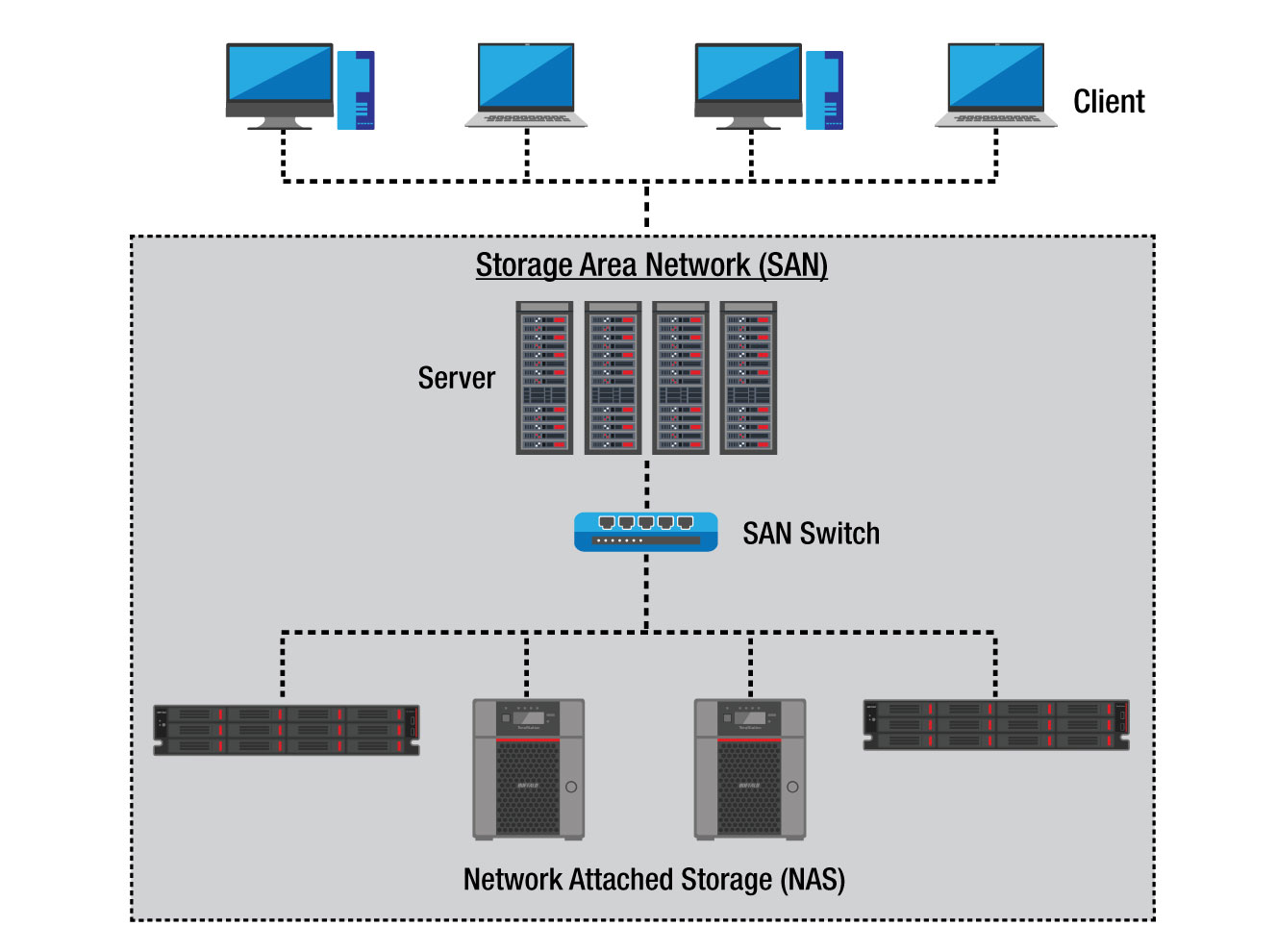 The open secret of enhancing business storage at a lower cost is to create a storage area network (SAN) utilizing Internet Small Computer Systems Interface (iSCSI). Almost all NAS servers offer the ability to configure iSCSI targets, allowing them to be integrated into a virtualized system for cost-effective storage. An iSCSI-SAN allows you to achieve increased return-on-investment on your existing storage infrastructure while saving you valuable time and effort.

iSCSI is one of the most popular storage area network protocols because of its simplified management and integration over IP. The iSCSI protocol connects computers to network storage (NAS) by using initiators to send block-based SCSI commands over a TCP/IP network, then utilizes Gigabit Ethernet (GbE) network components to send blocks of data over the IP network. NAS devices that support virtualization also allow you to run multiple virtual machines (VMs) on each single physical NAS device, with each VM running its own operating system and applications. iSCSI enables client devices such as servers and VMs to use storage from your NAS as virtual drives. These virtual drives are treated as if they are local drives, allowing data to be stored in remote network storage as well as abstracting data for applications that require storage.

iSCSI offers all the benefits of block-based storage, and its TCP/IP support allows for location-independent data storage to be consolidated into a centralized resource pool, thereby removing the limitations of local servers unable to share storage across devices. iSCSI is also widely supported by all major operating systems and hypervisors, and this universality lets your business to build a storage network at lower costs by allowing a wide variety of server hardware across the same network.

With the universality of iSCSI, there are many options to build a comprehensive iSCSI-SAN. Ideally, your storage network will offer enough security measures to keep your data safe, while remaining fast enough to be able to smoothly serve your users and applications.

For optimal performance, there are a few things to keep in mind:

For NAS devices, those that offer RAID are best, as RAID offers redundancy in your drives so that you don’t have to worry about individual drive failure. RAID 5 uses parity so that if one drive fails, the remaining drives can keep the array going until you replace the drive and rebuild the array. Your storage devices should also use error-correcting code memory (ECC RAM) for additional tolerance. ECC RAM can detect and correct the most common kinds of internal data corruption to further sustain drive operations and keep your data safe. Your NAS devices should also support virtualization, as that allows you to deploy and serve virtual machines. Common virtualization applications include VMware vSphere and Microsoft Hyper-V.

The other aspect of your iSCSI-SAN to consider is the network configuration. Network configuration is especially crucial to an iSCSI-SAN as it will wholly determine the performance of the SAN. While you can integrate iSCSI storage directly to your existing business network, it is highly recommended that you avoid such a setup, as iSCSI storage can generate a large amount of traffic that will cause bottlenecks on your network, slowing your operations down. As mentioned previously, it is ideal to move storage devices onto a dedicated Gigabit Ethernet network as your SAN.

One of the key benefits of deploying an iSCSI-SAN is streamlining your network. Typical LAN-based server storage systems are not immune to network bottlenecks, which can increase the time needed to complete tasks and thus curtailing your operations. Deploying an iSCSI-SAN on its own Gigabit Ethernet network will decrease traffic on your corporate network bandwidth and help relieve it.

Because iSCSI protocols work over Ethernet, an iSCSI-SAN can also disregard the distance barrier between the storage system and the application system. This eliminates any physical limitations of your network, enabling more efficient remote work. You can seamlessly link remote sites to your centralized data repository, and mirror data storage across a swath of geographically dispersed locations.

Physical data storage is often limited by servers, and disparate storage devices will invariably create storage space waste that can be extremely detrimental to businesses with limited IT budgets. According to a recent study, up to 40% of data storage is not being utilized in modern workspaces. Not only does this squander your current storage spending, it also has a direct impact on business expansion: without detailed knowledge of your current data storage usage, it is impossible to plan for future growth.

Deploying an iSCSI-SAN also lets you utilize storage virtualization. By consolidating various storage devices on the SAN and creating a single logical storage pool for all servers and applications, you can allocate your resources logically rather than physically, reducing waste. For example, you can assign certain storage blocks to critical business applications to ensure continuous service while dedicating other blocks for backups. This increases your storage utilization and takes the guesswork out of data storage usage.

An iSCSI-SAN can also easily scale to meet evolving business needs. If you need more storage in the future, you can add capacity as required and as you see fit. Since you can utilize nearly any device brand and capacity on the same storage network, you can allow for near-infinite storage expansion with hassle-free deployment and management.

Data security is paramount for every business, no matter the size.

In the modern business landscape, not having a dedicated backup system can cost you. Businesses need to remain online 24/7, giving you little time to back up data to an offline drive without impacting the LAN and creating server downtime. An iSCSI-SAN allows for streamlined backup operations, as you can back up data from across multiple locations to a shared storage resource, and de-couple backup resources from a data repository to a secure location.

The other side of data security is data recovery. Disaster often strikes when you’re least expecting it, which is why having a disaster recovery plan is so critical for your business, as you’ll need to be able to recover critical business data from across multiple applications should the worst happen. An iSCSI-SAN allows you to maintain a comprehensive disaster recovery and business continuity plan without having to budget additional IT resources.

It is no secret that up to 60 percent of small businesses fail to reopen after a disaster due to lack of resources or poor planning. And with modern threats such as ransomware becoming increasingly commonplace, data security should be top priority for every business. An iSCSI-SAN with secure Buffalo NAS can drastically lower your odds of having to wade through the quagmire of critical data loss.

One of the reasons why iSCSI is widely popular is its cost-effectiveness. An iSCSI-SAN can be set up with much lower initial and hardware acquisition costs as it utilizes same standardized, inexpensive Ethernet equipment, and it presents a myriad of opportunities to further save you money.

IT managers with limited budgets often have to do more with less. Unlike Fibre Channel, iSCSI does not require any specialized IT knowledge, saving you the need to look into specific personnel to manage and troubleshoot your storage network. Virtualization allows you to fully utilize your storage, saving you the hardware and power costs of additional servers. In addition, the flexibility of being able to add storage on the fly means maximizing your ROI on your network infrastructure. As your business grows, you can quickly and seamlessly upgrade your iSCSI-SAN by simply plugging storage into your  existing infrastructure.

With an iSCSI-SAN, you can reap the benefits of faster backups, improved scalability, and increased data security. It is a simple, nimble method of implementing network storage solutions with high ROI. Buffalo’s TeraStation solutions are the perfect NAS to help you implement your iSCSI-SAN, with models that run ECC RAM and are Veeam compatible for optimal iSCSI setups. For more information on the advantages of a SAN using Buffalo’s network-attached storage solutions, contact us today.