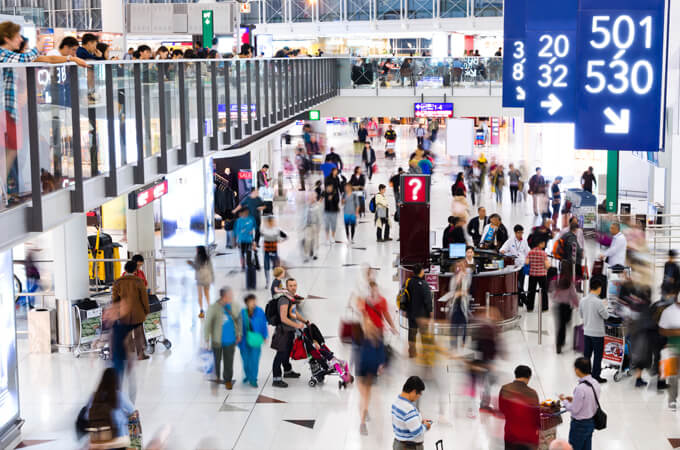 Airports are busy places and the operational needs of specialized, executive airports are no less challenging than those at airports that serve everyday travelers. Surveillance systems are needed to secure runways, hangars, terminals and offices. And the video collected from those systems supports billing and operations, as well.

It was natural that when an executive airport in suburban Houston went in search of a partner to integrate its on-site cameras into an overall high-capacity video monitoring system, EOS Digital Services would get the call. Based in Houston with a long track record of quality installations supported by strong customer service, EOS Digital Services was founded on the goal of making audio/visual connectivity easy and affordable to Houston businesses.

The airport was looking for a system to connect its previously installed cameras to a fully integrated solution that would monitor and record everything from security and access to the movements of corporate jets in and around the hangars and runways. Video of movements in the hangars was also necessary, in case of damage to the planes, to determine liability by identifying who was working on and near them.

"The client came to us to take over the project, maintain the cameras, and provide the storage solution," said Ilan Saadia, owner of EOS Digital Services. "They have some pretty expensive jets—Lear Jets and GulfStreams—in huge hangars there. Security is an issue. It was very important to them to have reliable surveillance," said Saadia.

Just as important as surveilling hangar activity, was gaining a video record of the comings and goings of the jets for billing purposes. By documenting jet traffic, the tail numbers on each plane can be documented, thereby designating ownership so the appropriate charges can be recorded.

"It was crucial to their operation that they get recordings with the tail numbers," said Saadia. "The main thing we were looking for was a reliable piece of technology that could store video records. We'd looked at different storage solutions. In the end it was a function of cost-effectiveness, ease of use and reliability."

EOS turned to Buffalo's pre-sales support for guidance. A Buffalo sales engineer worked closely with EOS to review the airport's needs and specifications and identify a solution to meet the client's requirements.

"Basically, the client was looking for a storage solution to store all the video files, and they wanted to keep this video a long time," said Saadia. "They needed something that would allow them to go back six months. That's why we went with generous storage."

EOS selected a 24 terabyte TeraStation™ 7120r Enterprise NAS solution. Not only does it possess the capacity, the TeraStation offers the level of fault-tolerance that the airport required. It supports hot-swappable hard drives so that, in the event of a disk failure, the defective drive can be removed and replaced without powering down the entire system. This allows operations to continue uninterrupted. It also employs RAID (Redundant Array of Inexpensive Drives) technology.

EOS installed the airport's new TeraStation 7120r in the default RAID 6 configuration to provide fault tolerance and maximize the amount of available storage, also equipping it with redundant power supplies to provide continuous power and allow operations to continue in the event of a power supply failure. All Buffalo TeraStation NAS solutions ship pre-configured in a default RAID mode to ensure efficient deployment and operation.

The 2U rack-mountable TeraStation also allows the system to scale to future needs if additional storage is needed at a future date. It easily installs into an equipment rack that can accommodate additional rack mountable units and can be secured in a communications or server room. And because the TeraStation is Linux-based, there are no operating system licensing fees; maintenance was also minimized as compared to Windows-based servers, there are relatively few system updates and patches.

EOS integrated the TeraStation 7120r into the airport's existing network system, including a SAN hosting the surveillance video management system. Eighteen high definition IP surveillance cameras, including two cameras with dual day-and-night lenses in each hangar, record on detected motion around the airport. The networked cameras not only capture and process 180 degree high resolution images but also allow viewing clients to do virtual pan and zoom as they access images from either the console or from their mobile devices. All are powered off of a multi-port POE switch and write video to the TeraStation 7120r where the video images are archived.

Houston served as a pilot project for another executive airport outside of Austin. Because the TeraStation is essentially a storage appliance, it can be plugged in, turned on and ready to store data with minimal set-up. Complete installation took only a couple of days.

"The main thing we were looking for was a reliable piece of technology that could store video records. We'd looked at different storage solutions. In the end it was a function of cost-effectiveness, ease of use and reliability."

The Houston installation was so successful, owners of the airports decided to immediately move ahead with the Austin installation. Operators in both locations can now peruse the recorded video at any time from any location to monitor operations and record the tail numbers of planes as they move on and off the runways. A large screen, tied to the system, is also in the pilot's lounge off the main terminal.

And, in terms of storage, the TeraStation's performance has outperformed expectations. The airport owners were looking to store six months of video. "Right now," said Saadia, "it's looking like a single TeraStation will do a lot more than six months."