The Unavoidable New Bandwidth Guzzlers That Are Holding Us Up

1. Server virtualization is the first source of problems we need to look at. Virtualization makes it possible to run more applications on fewer servers at the data center. Fewer servers mean less space and cooling is required, and they consume less power. This saves money, but soon has an impact on the bandwidth on the network, as consumption of this increases.

2. Voice and video over IP applications are some of the biggest guzzlers when it comes to bandwidth. There is nothing more disruptive than when a video lags or your voice breaks up during a video conference, after all.

3. People are never happy to replace old computer equipment while it is still working, but in many cases it is this that is contributing to delays on the IT network. Conversely, modern PCs nowadays have a 1 GbE network connection and these place a greater strain on a company’s network as a whole.

4. For many companies it remains a dream for the future, but the arrival of the Internet of Things (IoT) is inevitable. In IoT environments, connected devices and sensors send millions of data packets to central servers and storage units, who then send these back to the end devices, which have to analyze and evaluate them.

5. Last but not least, these extremely large amounts of data have to be backed up, replicated and, where necessary, restored. This can take some time. There are allegedly still companies who only back up their data once a week, at the weekend, because one night is not long enough to run a full backup.

It’s fair to say there is a multitude of reasons for trimming the company network to make it faster. In the past, a 1 GbE bandwidth on the network offered the best cost/performance ratio, but there is now cost-effective 10 GbE equipment available that makes it possible to multiply network output without having to increase the IT budget too much. The following section outlines the measures and devices that will speed up networks.

1. Cabling – The first step is to check the network cabling at your company to ensure suitability for
10 GbE. The following table shows that CAT6a or CAT7 cables, which enable transfer across distances of up to 100 meters, are required for transmission at 10 GbE.

2. Servers – If your server does not have 10 GbE connections, you can find a large selection of NICs (Network Interface Cards) on the internet.

3. Switches – A large selection of switches is available, offering a wide range of functions, depending on your own requirements, and costing up to $21,000. When switching to a 10 GbE environment, it is best to use switches that have a basic range of functions and are easy to install (i.e. plug & play), priced at $550 and upwards.

4. Storage Systems – The NAS systems you use should of course have a 10 GbE connection as well as a fast processor and sufficient RAM so that the data can be processed quickly – whether on the file server or during backup.

How Fast It Gets

The graph to the right shows you how the speed increases when using 10 GbE connections, contrasting this with the 1 GbE transmission speed. In our laboratory, we compared the write/read speeds with the TS5410, our latest NAS model, to its predecessor, the TS5400. This revealed that the 10 GbE connection is around three times faster than the 1 GbE line, and also that our top model of NAS achieves much faster speeds than its predecessors. 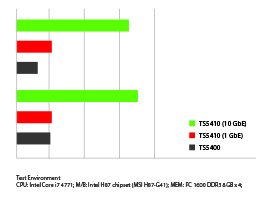 In practical terms, this means (for example) that it takes much less time to back up company data, such that a full backup of 3 TB data can be carried out overnight.

Rapid increases are also achieved in virtualized environments. The iSCSI protocol benefits from the additional bandwidth on the network and can run more virtual machines. Our tests prove that more than double as many write IOPS and more than 50% read IOPS are performed via iSCSI with a 10 GbE connection, compared to a 1 GbE connection. 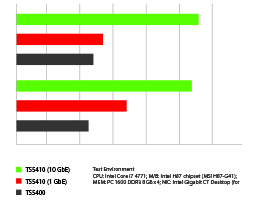 We also tested how many PCs can access the TS5410 via the network without the speed dropping. In our test configuration, the end devices were backed up to the NAS on an ongoing basis, with videos streamed to other end devices at the same time. Files were copied, read and deleted also. It took 24 hours to conduct the test, with the number of connected PCs continually increased as long as the test program continued to run without any errors and interruptions.

Using the 10 GbE connection made it possible to increase the number of “participating” PCs with simultaneous access to the NAS from 40 to 57.

As such, Buffalo switches and the new Buffalo TeraStation 5410 is an ideal product combination for small and medium-sized businesses and for branches and subsidiaries. Advertising agencies, music studios, and architect’s offices (i.e. small teams) who need access to large amounts of data every day and have limited IT budgets at their disposal really stand to gain. 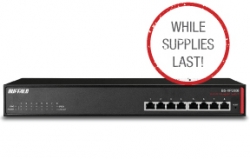